Thinking how to organize the upcoming material about geometry and physics I came about a recent controversy about an electromagnetism lecture by Walter Lewin and I want to talk about it in this post.

First, a little background. When I started teaching undergraduate physics I needed help on how to structure the lectures. Personally I wanted to emulate Feynman lectures, but the physics departments impose on you either Giancolli or Young and Friedman. I turned to internet for help and I found the outstanding undergrad lectures by Walter Lewin which I adapted to my needs - thank you Professor Lewin. In lesson 16 on electromagnet induction which you can watch below

on minute 34:54 the fireworks begins. The setup starts unassuming: a trivial circuit with a 1 V battery and two resistors in series. The current is computed as well as the voltage drop across the larger resistor. Then the battery is removed and is replaced by a solenoid in the middle of the circuit which generates an increasing magnetic field such that the induced voltage is the same 1 V as the battery. Now the question becomes: what is the voltage drop on each resistors? The answer is that two voltmeters connected on the same points one on one side of the loop and one of the other side will record different voltages of opposite polarities! In this case one will record +0.9 V and the other -0.1 V. And the experiment confirms this!!!

This is deeply at odds with our intuition and there are a lot of "proofs" of why Lewin is wrong. Here is one example which has the advantage over others that it is in English.

Lewin responded to those challenges in two distinct posts in a poor manner in my opinion: he simply repeated slowly and loudly his explanation and did not address the root cause of the discomfort people experience when presented with this counter-intuitive phenomena. So I will attempt to add my own  pedagogical explanation of how to understand this.

Now you may say: this is absurd, why different currents flow through the two voltmeters? Can I just simply use only one voltmeter and place it on the right hand side of the circuit, and then flip it to the left hand side? Why would the reading change?

But before doing it, I want to say what is wrong in the "disproof" video above. First, the solenoid is the same size of the circuit and is placed under the circuit. This allows for the gradual voltage change due to crossing of the changing magnetic field to be misinterpreted as a voltage drop on the copper wiring. Second, the explanation is inconsistent with regards to the current intensities. If you compute the intensity in the copper wire due to 1 V difference you do not get 1 milli Ampers, but a huge current because copper wire has almost zero resistance. Also there is a big misunderstanding on the how to compute the flux by stating that a vertical plane has no flux going though it. If the loop would be completely vertical this would have been correct, but the the voltmeter loop also contains a horizontal path closing the circuit and this has non-zero magnetic flux crossing through it.

So now onto the computation. I will use only one voltmeter which is placed on the right like in the first picture below: 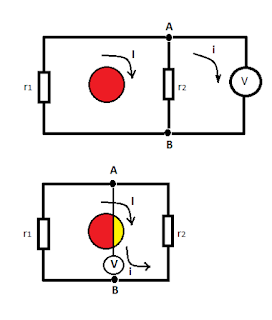 Then I move the connection points A and B and flip the voltmeter wire to cross the magnetic region (see the second picture and notice that the direction of i stays the same: from the voltmeter to r2).

Let's work out the math in the first case. There are two loops with currents I and i and the resistance of the voltmeter is R >> r1, r2:

Now we are proceeding to flip the voltmeter from right to the left. Suppose that during flipping we cross s% of the changing magnetic flux area (the yellow area) with the voltmeter loop. The first equation reads as before:

the same order of magnitude tricks apply and we get:

Alternatively when the voltmeter is flipped all the way to the left we can consider a loop not enclosing the area of changing magnetic field and arrive at the same -0.1 V by using Kirchhoff's just like we did on the right hand side.

If we consider two left and right voltmeters we can also understand why they record different values. We can consider the outer loop and apply the induction law to it and see that a current "i" flows from one voltmeter through the other due to the area of changing magnetic field. Since the voltmeters are polarity sensitive one would record a positive voltage and another one a negative voltage. In fact we can further simplify the setting by removing the two resistors completely and in this case one voltmeter would record +0.5 V and another -0.5 V:

In conclusion the Walter Lewin is completely correct and the controversy stems from blind trust in Kirchhoff's circuit laws which are valid only when there is no changing of magnetic flux in the circuits and a misunderstanding of Maxwell's equations.