I was on vacation for a week in Yellowstone and I will put the physics post on hold want to share what I saw. First, the park is simply amazing and I highly recommend to visit if you have the chance. You need at least 3 days as a bare minimum. The main road is like the number 8 and on the west (left) side you get to see lots of fuming hot spots ejecting steam and sulfur. 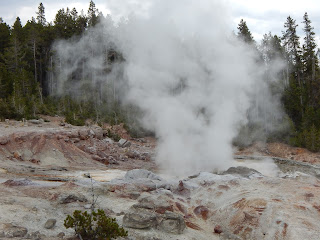 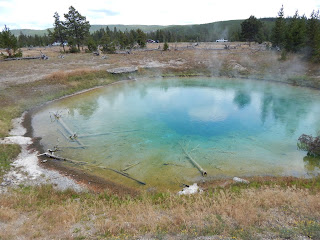 The colors are due to bacteria and different bacteria live at different temperatures giving the hot spots rings of color.

On the south side you get the geysers and Old Faithful which erupts every 90 minutes. 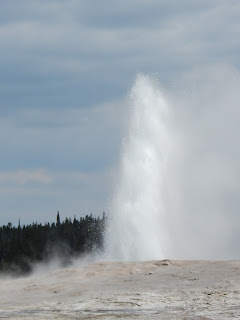 You need to be there approximately 1 hour before the eruption to get a sit on the benches which surround Old Faithful. There are other geysers but you don't know when they erupt.

On the east side at the bottom of the 8 there is Yellowstone lake which gives rise to Yellowstone river and the Yellowstone canyon. Not much to do at the lake, the water is very cold.  The river forms two large waterfalls and you can visit them on both sides. 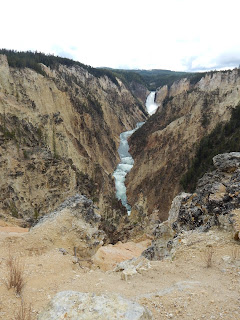 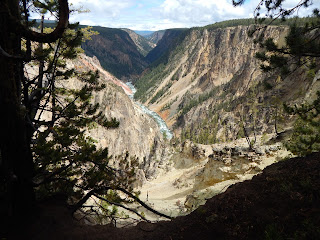 Coming north on the east side, you encounter more waterfalls and a bit of bisons. If you are lucky you get to see in the distance bears usually eating a dead moose. By the way, there is a big business ripoff in terms of bear sprays. You can buy one for $50, but you should rent one for $10/day when you hike in the forest. Even better just buy a $1 bell to wear to let the wildlife you are there (bears avoid people if they can hear them coming).

You can hike Mt. Washburn (4 hour round trip hike) to get a panoramic view of the park 50 miles in any direction. 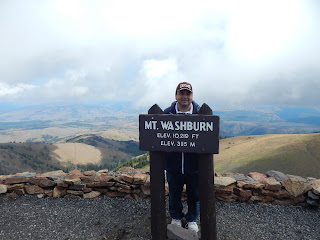 There is nothing to see in the east-west part of the road at the middle of the 8, and on the the north of the east road there is another road leading east in Lamar's valley. Here is where you see a ton of wildlife: bisons, moose, wolves. Literally there are thousands of bisons in big herds which often cross the road. 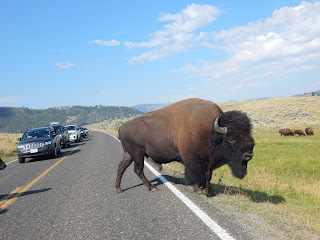 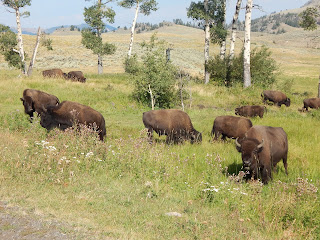 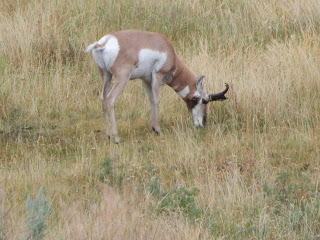 Driving in the park is slow (25 mph) due to many attractions on the side and the traffic jams caused by animals. You need one day for north part, one day for the south loop, and one day for Lamar valley.

Yellowstone is at the spot of a supervolcano which erupted 7 times in the past: when it erupts it covers half of US with volcanic ash. There is a stationary hot spot of magma and because the tectonic plate moves different eruptions occur in different places. The past eruption locations trace a clear path on the map. 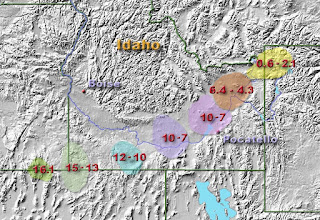 Yellowstone park is located in the caldera (the volcano crater) of the last eruption.

The origins of gauge theory


After a bit of absence I am back resuming my usual blog activity. However I am extremely busy and I will create new posts every two weeks from now on. I am starting now a series explaining gauge theory and today I will start at the beginning with Hermann Weyl's proposal. 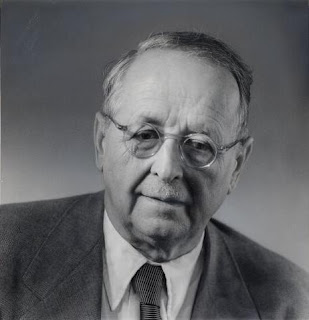 In 1918 Hermann Weyl attempted to unify gravity with electromagnetism (the only two forces known at the time) and in the process he introduce the idea of gauge theory. He espouse his ideas in his book "Space Time Matter" and this is a book which I personally find hard to read. Usually the leading physics people have crystal clear original papers: von Neumann, Born, Schrodinger, but Weyl's book combines mathematical musings with metaphysical ideas in an unclear direction. The impression I got was of a mathematical, physical and philosophical random walk testing in all possible ways and directions and see where he could make progress. He got lucky and his lack of cohesion saved the day because he could not spot simple counter arguments against his proposal which could have stopped him cold in his tracks. But what was his motivation and what was his approach?

Weyl like the local character of general relativity and proposed (from pure philosophical reasons) the idea that all physical measurements are relative. I particular, the norm of a vector should not be thought as an absolute value, but as a value that can change at various point of spacetime. To compare at different points, you need a "gauge", like a device used in train tracks to make sure the train tracks remained at a fixed distance from each other. Another word he used was "calibration", but the name "gauge" stuck.

Also suppose that there is a scaling factor \(S(x)\):

and so to first order we get that N changes by:

However this is disastrous because (as pointed by Einstein to Weyl on a postcard) it implies that the clocks would change their frequencies based on the paths they travel (and since you can make atomic clocks it implies that the atomic spectra is not stable).

Later on with the advent of quantum mechanics Weyl changed his idea of scale change into that of a phase change for the wavefunction and the original objections became mute. Still more needed to be done for gauge theory to become useful.

Next time I will talk about Bohm-Aharonov and the importance of potentials in physics as a segway into the proper math for gauge theory.