Is the Decoherent Histories Approach Consistent?

One particular approach of interpreting quantum mechanics is Decoherent Histories. All major non-Copenhagen approaches have serious issues:
- MWI has the issue of the very meaning of probability and without a non-circular derivation (impossible in my opinion) of Born rule does not qualify for anything but a "work in progress" status.
-GRW-type theories make different predictions than quantum mechanics which soon will be confirmed or rejected by ongoing experiments. (My bet is on rejection since later GRW versions tuned their free parameters to avoid collision with known experimental facts instead of making a falsifiable prediction)
-Bohmian approach has issues with "surreal trajectories" which invalidates their only hard ontic claim: the position of the particle.

Now onto Decoherent Histories. I did not closely follow this approach and I cannot state for sure if there are genuine issues here, but I can present the debate. On one hand, Robert Griffiths states:

"What is different is that by employing suitable families of histories one can show that measurement actually measure something that is there, rather than producing a mysterious collapse of the wave function"

On the other hand he states:

"Any description of the properties of an isolated physical system must consists of propositions belonging together to a common consistent logic" - in other words he introduces contextuality.

Critics of decoherent (or consistent) histories use examples which are locally consistent but globally inconsistent to criticize the interpretation.

Here is an example by Goldstein (other examples are known). The example can be found in Bricmont's recent book: Making Sense of Quantum Mechanics on page 231. Consider two particles and two basis for a two-dimensional spin base \((|e_1\rangle\, |e_2\rangle), (|f_1\rangle, |f_2\rangle))\) and consider the following state:

Then consider four measurements A, B, C, D corresponding to projectors on four vectors, respectively: \(|h\rangle, |g\rangle, |e_2\rangle, |f_2\rangle\) where:

Then we have the following properties:

So what is going on here? The mathematical formalism of decoherent histories is correct as they predict nothing different than standard quantum mechanics. The interpretation assigns probabilities to events weather we observe them or not, but does it only after taking into account contextuality. Is this a mortal sin of the approach? Nature is contextual and I don't get the point of the criticism. The interpretation would be incorrect if it does not take into account contextuality. Again, I am not an expert of this approach and I cannot offer a definite conclusion, but to state my bias I like the approach and my gut feeling is that the criticism is without merit.
PS: I'll be going on vacation soon and my next post will be delayed: I will skip a week.

I got a lot of feedback from last 2 posts and I need to continue the discussion. Even Lubos with his closed mind unable to comprehend anything different than the textbooks from 50 years ago and his combative style said something worth discussing.

But first let me thank Cristi for the picture below which will help clarify what I am trying to state. Let me quickly explain it: the interferometer arms are like the two sides of Einstein's box and once the particle was launched -for the duration of the flight- you can close the input and output of the interferometer, open the exit just in time and still have the interference. So this seems to contradict my prediction. But does it?

This equivalence exists in a precise mathematical sense and respects the three properties of the equivalence relationship: reflexivity, symmetry, and transitivity. Break the Cartesian pair equivalence by any mechanism possible and you get the collapse of the wavefunction.

However there is a way to make the collapse permanent: just wait enough time with the ends closed such that the energy-time uncertainty relation allows you to reduce the energy uncertainty to the point that you can detect the particle inside by weighing the half-boxes or the arms of the interferometer. Suppose the ends of the interferometer is made out of perfect mirrors. If you wait long enough (even though you are not physically weighing anything) and then reopen the exits will result in loss of interference: this is my prediction.

But what happens if you only wait a little bit of time and you are in between full interference and no interference? You get a weak measurement.

Now let me discuss Lubos objection and then come back to the nonlocality point Bricmont was making.

First Lubos was stating: "If you place some objects (a wall) at places where a particle is certain not to be located, the effect on the particle's future behavior is obviously non-existent". The objection is vacuous. Obviously I don't disagree with the statement, but his entire line of argument is incorrect because collapse is not a dynamic process. If collapse would have had a dynamic origin then we would have had a unitary explanation for it we would have had to talk about the "propagation" of collapse. What the Cartesian pair mathematical framework does is first getting the rid of the consciousness factor, and second clarifying the precise mathematical framework of how the observer should be treated within the formalism. Contextuality is paramount in quantum mechanics and cutting the box changes the context of the experiment.

Now onto Bricmont argument. Andrei stated in his comments: " I still do not see the relevance of all this in regards to the locality dilemma.". It has deep relevance as I will explain. And by the way, the rest of Andrei's comments were simply not worth answering-nothing personal: I don't have the luxury of enough free time to answer each and every comment.

Bricmont's point on Einstein's boxes was this: "either there is action at a distance in nature (opening B1 changes the situation at B2), or the particle was in B2 all along and quantum mechanics is incomplete "

Option one is clearly not the case. Wait long enough and the interference will no longer happen. At that point the particle IS in either B1 or B2 and shipping one box far away changes nothing. But how about option 2? Is quantum mechanics incomplete? Bohmian supporters think so because they augment the wavefunction with a hidden variable: the particle's initial position. Do we actually need this initial condition to make predictions? Not at all. Last thing to consider: was the particle in say B2 all along? If yes, there is no interference because the which way information. What about weak measurements? This is a case of even more examples of "surrealistic trajectories": combine two interferometers and you can obtain disjoint paths!!! The only thing which makes sense is that the particle does not have a well defined trajectory.

My question to Bohmian interpretation supporters is as follows: In the above picture close the arms long enough. What happens to the quantum potential? Does it dissipate? If yes how? If no, do you always get interference after opening the stormtrooper end regardless of the wait time?

Finally back to measurement. There is no (strong) measurement without collapse. Collapse happens when a particular equivalence relationship no longer holds. Mathematically it can be proven that the wavefunction is projected on a subspace of the original Hilbert space. Moreover uniqueness can be proven as well: that this is the only mathematically valid mechanism in which projection can occur. Interaction between the quantum system and the measurement device can break the equivalence, but changing the experimental context can achieve the same thing as well. A measurement does not happen however until irreversibility occurs: there could be amplification effects, or as above enough time passes such that the energy uncertainty is low enough and the "which way" information becomes available regardless if we seek this information or not.
Posted by Florin Moldoveanu at 12/11/2016 04:09:00 PM 5 comments: 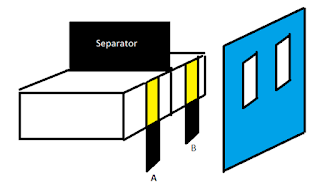