The basic setup of the paper is simple: the double slit experiment which when solved in Bohmian formalism produces the result below: 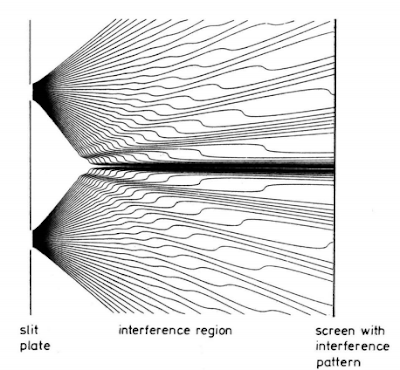 The first thing one notices is the symmetry of the picture which shows that if the particle enters the top slit it will end up in the top portion of the screen, and similarly for the bottom slit. So what would happen if we only have one slit? We cannot say anything interesting in this case, but Englert, Scully, Süssmann, and Walther observed something funny: if we have both slits open and we place a type of which-way detectors in front of the slits which do not perturb the center of the mass wavefunction, the symmetry of the picture in the Bohmian description is preserved.

This means that in this case in Bohmian interpretation still if the particle enters the top slit it will end up in the top portion of the screen, and similarly for the bottom slit. However, there is no interference present in this case, and because of this, there is a non-zero probability that the particle entering the top slit will be detected in the bottom part of the screen.

So they uncovered a serious interpretation problem for dBB theory: there are Bohmian trajectories without a correspondence in reality. The term coined by the authors of the paper was surrealistic trajectories:

"Does the retrodicted Böhm trajectory always agree with the observed track? Our answer is: No."

Citing from the paper, here are some key sentences:

"In Bohmian mechanics, a particle has a position and nothing else,..."

In summary, the only advantage of dBB theory is the realism of the particle position, but there are cases where position measurements for particles contradict the dBB trajectory. The name of the paper was marketing hit, but a long term disaster: it allowed to be summarily dismissed by dBB supporters.

The original reply to the surrealistic paper can be found here. Here are key statements from the reply:

"The authors distinguish between the Bohm trajectory for the atom and the detected path of the atom."

"In this regard it would be well to bear in mind that before one can speak coherently about the path of a particle, detected or otherwise, one must have in mind a theoretical framework in terms of which this notion has some meaning."

"BM provides one such framework, but it should be clear that within this framework the atom can be detected passing only through the slit through which its trajectory in fact passes. "

"Thus BM, together with the authors of the paper on which we are commenting, does us the service of making it dramatically clear how very dependent upon theory is any talk of measurement or observation."

"the "utter meaningless"ness of the question as to which "slit" the atom went through can, within the framework of orthodox quantum theory, in no way be avoided through the use of "one-bit detectors" - however they are called!"
Basically the reply is an appeal to the contextuality of the formalism and they make 3 points:

1. you need a theoretical framework to discuss the concept of measurement
2. BM and standard QM make the same predictions
3. there are no trajectories in standard QM and you have no grounds to criticize BM on the basis of standard QM

Now I cannot speak for the authors of the surrealistic paper, but it is clear that Englert, Scully, Süssmann, and Walther did provide an analysis IN the formalism of Bohmian mechanics. As such, it deserves a reply in the Bohmian framework as well. [If one looks at this page for example (which is the most authoritative exposition of Bohm theory) the topic is not even mentioned.]

A modern reply to the surrealistic paper in the framework of Bohmian mechanics can be found here. Basically the take from this paper is that in their setup the second photon says that Bohm trajectories are surreal—and, thanks to nonlocality, its report is not to be trusted. I will need a bit of time to study this paper carefully, and I will follow up on this after I'll reach a definitive conclusion. Right or wrong, this paper puts the spotlight back on a forgotten dBB topic IN the framework of dBB theory.
Posted by Florin Moldoveanu at 5/27/2016 05:59:00 PM 17 comments: 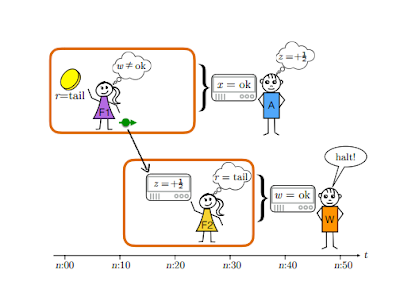 Bohr was right in demanding the treatment of the measurement apparatus as a classical object. Still, how can superselection arise out of a pure quantum formalism. This means that there are distinct relevant Hilbert spaces which when embedded into a single Hilbert space exhibit superselection. Hmmm... Where have I seen this before? Welcome to the measurement problem solution proposal using Grothendieck group construction. The physical basis of this is quantum indeterminacy. Outcome randomness in quantum mechanics is not some undesirable feature which needs to be explained away, but an essential part of nature.
Posted by Florin Moldoveanu at 5/13/2016 10:45:00 PM 22 comments: