The Math of Gauge Theories

With a bit of a delay I am resuming the posts on gauge theory and today I will talk about the math involved.

In gauge theory you consider the base space-time as a manifold and you attach at attach point an object or what is called a fiber forming what it is called a fiber bundle. The picture which you should have in mind is that if a rug. 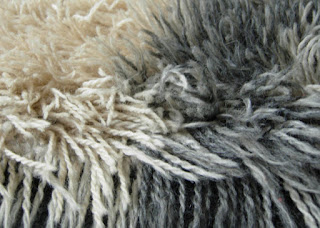 The nature of the fibers is unimportant at the moment, but they should obey at least the properties of a linear space.

Physically think of the fibers as internal degrees of freedom at each spacetime point, and a physical configuration would correspond to a definite location at one point long the fiber for each fibers.

The next key concept is that of a gauge group. A gauge group is the group of transformations which do not affect the observables of the theory.

Mathematically, the gauge symmetry depends on how we relate points between nearby fibers and to make this precise we only need (only) one critical step: define a covariant derivative.

If d is the ordinary derivative, let's call D the covariant derivative and their difference (which is a linear operator) is called either a differential connection, a gauge field, or a potential:

The condition we will impose on D is that is must satisfy the Leibniz identity because it is derivative:

which in turn demands:

In general only one part of A may be used to compensate for gauge transformations, and the remaining part represent an external field that may be interpreted as potential. When no external potentials are involved, A usually respects integrability conditions. Those conditions depend on the concrete gauge theory and we will illustrate this in subsequent posts.

When external fields are present, the integrability conditions are not satisfied and this is captured by what is called a curvature. The name comes from general relativity where lack of integrability is precisely the space-time curvature.

The symmetry properties arising out of curvature construction gives rise to algebraic identities.

So to recap, the steps used to build a gauge theory are:

In the following posts I will spell out this outline first for general relativity and then for electromagnetism. Technically general relativity is not a gauge theory because diffeomorphism invariance cannot be understood as a gauge group but the math similarities are striking and there is a deep connection between diffeomorphism invariange and gauge theory which I will spell out in subsequent posts. So for now please accept this sloppiness which will get corrected in due time.
Posted by Florin Moldoveanu at 9/24/2017 07:02:00 PM