Can you generate entangled particles which never interacted?


This post is the continuation of the last one because (1) it attracted a lot of attention and (2) no consensus was reached by the viewers. In particular, Lubos Motl was insisting on the fact that you cannot generate entangled particles which never interacted. So I am making one last attempt to convince him of the contrary. 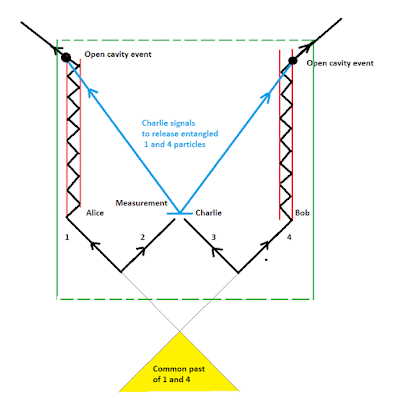 The setting is from last time: entanglement swapping. This time I will not write Latex and instead I will explain the picture above (please excuse my poor MSPaint abilities). For the sake of argument, I am using photons and I show their worldliness in black going at 45 degree angles. Alice and Bob have the red resonant cavities which capture the 1 and 4 photons (feel free to replace the cavities with long enough optical fiber loops). The cavities have a release or absorption mechanism which is activated by Charlie upon obtaining the result of a projective measurement on photons 2 and 3. On average Charlie obtains his desired output 25% of the time in which case he sends the signal to release the 1 and 4 photons to the outside world. The other 75% of the time Charlie sends the signal to absorb the 1 and 4 photons.

From the outside Alice, Bob, Charlie, and 1 and 4 photons are inside of a green box. At random times out of the green box comes out two entangled photons which never interacted in the past.

"Excellent. Now, the filtering is caused by the decision in Charlie's brain which is in the intersection of the two past light cones of events -measurements of particles 1,4, right?

So you haven't found any counterexample to my statement, have you?"

Now here is why Lubos is wrong: See the picture below. He contends it is the purple area which is important and the fact that Charlies decision is made inside it  (again excuse my lack of precision drawing 45 degree lines). 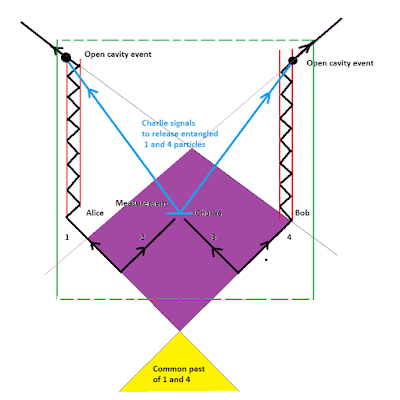 Why is the purple area irrelevant to the discussion? Because when the photons 1 and 4 are in their respective red cavities they do not interact with each other!

Viewed from outside of the green box at random times comes out two entangled photons which never interacted in the past and could not have interacted in the past because first they were spatially separated, and second they got trapped in an isolation cavity long enough for the signal from Charlie to reach their cavity and release them.

It is hard to explain all this in words without pictures. I tried to have a crude drawing last time in the comment section but formatting mangled it. I was suspecting Lubos was only pretending not to understand my argument, but now a week after the exchange I tend think he had a genuine misunderstanding because while he was thinking of the purple area I was talking about the yellow one.

Talking about other comments, last time a statement from Andrei caught my attention:

""S1 does not imply nonlocality, but nonrealism"

I will address this in a future post because a quick reply does not make justice to the topic. Is is true that "You measure one particle here and you create the value of the spin for both entangled particles (including the one that is far away)"? This is deeply related with Einstein's realism criteria:

"If, without in any way disturbing a system, we can predict with certainty (i.e., with probability equal to unity) the value of a physical quantity, then there exists an element of physical reality corresponding lo this physical quantity."

This is a very natural criteria given a classical intuition, but it is however false. And showing why and how it is false is not a trivial matter. And if Einstein realism criteria is false then this is not true either: "you measure one particle here and you create the value of the spin for both entangled particles (including the one that is far away)."