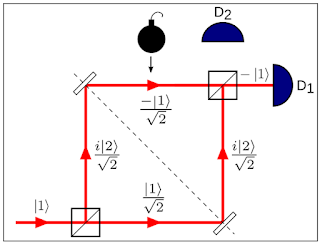 So how does my proposed solution to the measurement problem using the Gothendieck group construction fare against interaction free measurement? It passes with flying colors. Gothendieck group construction demands the construction of a Cartesian pair, and physically the pair can be identified with the quantum system and the observer. Also the collapse is a change in representation, not a unitary evolution. Last, the unitary evolution is completely preserved. The only strange part is the existence of many Hilbert spaces each corresponding to a potential outcome. Still, this proposal is not the many worlds interpretation. Since the Hilbert spaces are only mathematical constructs devoid of physical reality ("Quantum phenomena do not occur in a Hilbert space. They occur in a laboratory"-Asher Peres), we can embed all those Hilbert spaces into a single one and the quantum interpretation which arises out of the Gothendieck group construction is that of Copenhagen.
Posted by Florin Moldoveanu at 6/03/2016 10:32:00 PM