Two posts ago I discussed the bouncing droplets topic, but since that was part of an April Fools joke that maybe left a wrong impression on the topic. Today I want to present how quantum superposition contradicts the classical idea of a particle trajectory. For fun we will call our particle Waldo, and try to locate it along the path. 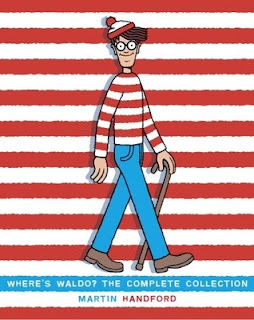 What I will talk about today is based on the example given by Jean Bricmont's in his book Making Sense of Quantum Mechanics  In turn this example is inspired by David Albert's book: Quantum Mechanics and Experience. As a disclaimer, Bohmian quantum mechanics does provide a location for "Waldo" but I will not discuss how in this post. However, as we will see, classical ideas are incompatible with the quantum effect of superposition.

For our discussion we want to measure the spin of an electron, on the z and x axis. We know how to do that: simply pass the electron through a zone of an inhomogeneous magnetic field along that axis and observe the deflection.We can think of this as a box with one input slot and two output slots which sorts the incoming electrons. Given the "z" or "x" orientation of the magnet inside this imaginary box we have two kinds of sorting boxes, and experimentally we establish two rules:

Now let's have a source of electrons which where already sorted UP by a Z-Box and let's pass them through an X-Box (no pun intended). By the rules above we get 50% of them sorted x-UP and 50% sorted x-DOWN. Let us further pass each of the two beams through Z-Boxes, and according to the rules above we have a 4 way split as in the picture below

Now here comes the surprise: make the final two Z-boxes a single Z-box by bouncing the electron beams off mirrors and recombining them before the one and only final Z-box:

What percentages do we obtain? Remember that the boxes are imaginary boundaries for the inhomegenous magnetic field and instead of using mirrors we can use the first setting and bring the boxes closer and closer by overlapping the magnetic fields inside until the two boxes become one. So the first picture would make us predict that when we have only one box we would get 25+25=50% z UP and 25+25=50% z DOWN, while in fact we get 100% z UP and 0% z DOWN. This quantum surprise has a name: quantum superposition. It is superposition which distinguishes quantum from classical mechanics.

Now suppose we block one of the paths in the second picture (which illustrates a Mach-Zehnder  interferometer) then by applying the second rule from above we would get 25% z UP, 25% zDOWN, and 50% lost by the barrier blocking the path.

Why is superposition at odds with the notion of trajectory? Which path does Waldo take when going through the interferometer? A classical way of thinking would be as follows:
The trouble with this reasoning is counterfactual definiteness which is obeyed by classical mechanics. For example in the first two arguments above we assume that a the experiment would be the same if we would place a barrier in one of the paths and this would not change anything. In fact, quantum mechanics is contextual and the experimental setting plays a critical role into what it is measured. However, in classical physics we assume the existence of properties of objects even when they have not been measured and this is not the case in the quantum world.