I was surprise by the interest in the last post, and I think a continuation of the topic using new material is in order.

As side notes apparently I got upgraded on Lubos scale to "confused", so I hope I finally got past the misunderstanding that I am a closet admirer of classical physics which was really absurd since I am deriving quantum mechanics from physical principles. Currently I am reading Jean Bricmont's new book Making Sense of Quantum Mechanics which is of course written from the point of view of Bohmian interpretation - Bricmont is well known Bohmian supporter- and I will report on my read after I will be done.

Now back on local realism. In an interferometer one cannot locate the path a particle is traveling because the "which way information" destroys the interference. Moreover, by adjusting the lengths of the two paths, one can tune the interference in such a way that only one output will collect all the particles, and the other output will record a null result. So what would happen if we combine two such interferometers in such a way that they touch at point P as in the picture below? 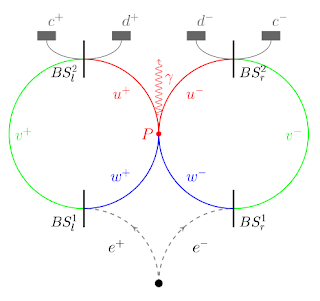 This is the setup of Lucien Hardy's thought experiment and the experiment has one more twist: in one interferometer we inject electrons, while in the other we inject their anti-particle: the positrons.

So far this is nothing fancier than the interferometer discussion from "Where is Waldo?". But now comes the catch. If we use electrons and positrons, when they both arrive at P we will have an annihilation resulting in a photon represented as \(\gamma\) in the picture above. The key question for local realists is: can we detect at the same time the positron at d+ and the electron at d- ?

When we operate the interferometers without touching this can only happen in the case of a blocked path which kills the interference phenomena. However, in the touching case, when both paths are blocked you get anihilation and a gamma photon. Any local realistic description of the experiment cannot predict simultaneous detection of the electron and positron at d-, and d+. Still this is allowed to occur by quantum mechanics.

This thought experiment is independent of initial conditions and hence is free of the superdeterminism loophole. The challenge for the local realist is to explain why sometimes we get simultaneous detection at detectors d+/d- when the interferometers paths are touching at P, and never when the interferometers do not touch.
Posted by Florin Moldoveanu at 4/29/2016 11:56:00 PM