The algebraic structure of Quantum Mechanics

Today we will conclude the mini-series on quantum mechanics reconstruction as we have all the required ingredients. We only need to perform one last computation to arrive at an associative product, the regular complex number multiplication in the Hilbert space representation.

But first, let me point out some strange notation I was using in all the prior posts about \(J\) which obeys \(J^2 = -1\). Why not simply call it \(i = \sqrt{-1}\), the imaginary unit? The reason is that \(J\) is more than the imaginary unit, and it is in fact a tensor of rank (1,1): \(J^{I}_{J}\) and represents a map between the Jordan algebra to the Lie algebra. It also forms an "almost complex structure" which when multiplied (in the flat case) with the symplectic form gives rise to a metric tensor generating a Kahler manifold. So there is much more to it but I will not expand on this because we are led down the hard path of Poison manifold quantization. To put it in perspective, the proof of Poison manifold quantization got Maxim Kontsevich the Fields medal.

Only for the simplest 1-dimensional case we can consider \(J = i\). In the finite dimensional case, by some algebraic magic (the Artin-Wedderburn theorem) one can show what the number system must be that of complex numbers in the case of transition probabilities (and I won't expand on this either, it is a large topic on itself too).

So why do we need associativity? When you run say an electron through s Stern Gerlach device you can pass the same electron through another Stern Gerlach device and concatenate two experiments: the output from one is the input to the next one. Now imagine three such devices (a,b,c) and ask yourself: what constitutes an experiment? The experiment separation occurs only in your mind, and to consistently reason about such a setup and define states you need associativity: \((ab)c = a(bc)=abc\).

So how about a product beta:

Its associator involves two beta products and it is not immediately obvious it is zero but it can be computed and it is not hard to show that:

which is indeed zero after using Leibniz for the first two terms in the last line.

So now we can present the algebraic structure of quantum mechanics which is:

a real vector space equipped with two bilinear maps \(\sigma\) and \(\alpha \) such that the following conditions apply:

From the associator identity it is immediately clear that in the classical case the product sigma is associative and in fact it is nothing but the usual function multiplication. It is not straightforward to prove, but the result it is available in books about Poisson manifolds, that alpha in this case is nothing but the usual Poisson bracket. And so in fact the two product algebra from above obtained by invariance under composition leads in a straightforward manner to Poisson manifolds and classical physics. To get to quantum mechanics we have three roads:

None of the three roads are satisfactory however, and more needs to be done. The third option gets you to the usual Hilbert space representation but does not say anything about uniqueness. The first option does not work in the case of spin, and the second option while better than the third, still has an open uniqueness problem in the infinite dimensional case.

Now we can look back and see what was obtained: 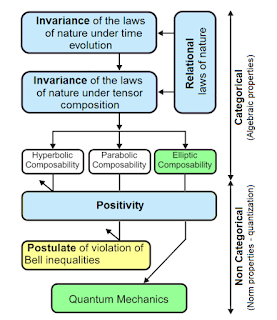 The categorical (algebraic) part of the reconstruction works because of the existence of an universal property which translates the tensor product physical principle of invariance under composition into algebraic consequences. The non-algebraic part is an open problem in the infinite dimensional case, and different quantization techniques corresponds to the second de Rham cohomology making the classification of representations a hard problem.

The classification of Jordan algebras is however well known and this restricts the possible number system representations over the reals, complex, and quanternions in the case of transition probability. There is no such thing as octonionic quantum mechanics because octonions are not associative, and the product beta is.

If the questions we ask nature do not result in a probability, but in a probability current then we actually get Dirac's equation by an unusual Hodge theory route. The quantum mechanics number system is SL(2,C) in this case and the Hilbert space generalizes to a Hilbert module. This shows again that the complete classification of the two-product algebra representations is not at all trivial.