The pictorial formalism of quantum mechanics

Today I want to talk about a nice formalism of quantum mechanics developed by Samson Abramsky and Bob Coecke. The underlying mathematical formalism is that of category theory.

The pictorial formalism describes systems and processes. The best analogy (with very good reason) is with computer science. There FORTRAN was one of the earlier languages of functional programming. In Fortran one writes functions which take an input, perform some transformation (does a computation) and generate an output. One can formally represent such a program with a box connected by two wires: the input and the output. From a high level perspective it does not matter what goes on inside the box. More important than the inner workings is that those functions can be executed one after another and can be combined like Lego to generate complexity.

Similarly in the pictorial formalism one encounters linear transformations of the wavefunction and those transformations can be combined for complexity. What makes it all interesting is that one can operate simultaneously on several inputs (like on two particles in a singlet state), or on parts of composite quantum systems.

The pictorial rules are extracted from the usual Hilbert space formulation to guarantee agreement with quantum mechanics standard computations. The Choy-Jamilkowsky isomorphism is baked in from the beginning in the approach. Here are some primitive concepts. A state is a process with no input and one output, and a test (measurement) is a process with an input and no output: 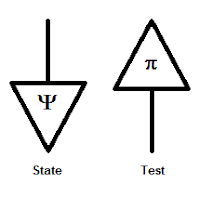 The combination of a state followed by a test gives you the probability.

Other primitive notions are tensor product \(\otimes\) and composition \(\circ\):

A fundamental relationship is this:

which can be proven pictorially by inspecting this diagram: 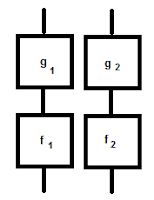 Quantum information is trivially represented in this approach. For example here is how teleportation protocol is drawn: 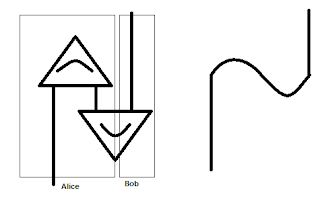 Alice shares with Bob a Bell pair (the bottom triangle which represent a state) and Alice performs a bipartite measurement on the qubit to teleport (the leftmost line) and one of the Bell particle (the upper triangle). Then she transfers a classical bit to Bob who can use it on his half Bell pair particle to recover Alice's original qbit. The information flow can be continuously traced as in the line on the right. Sometimes the information seem to flow from the future to the past, but the line can be deformed by pulling the ends to straighten it and restore the causal order.

My poor drawings in Paint do not do justice to this very powerful method to represent the information flow. In explaining this approach I have a major weaknesses: I do not know the latest standardization of symbols. However I understand that a book on the pictorial formalism will soon become available and this will clarify the notation.

In the meantime I want to encourage the reader to look up for themselves this amazing approach. Here is an old but good reference:

In the pictorial approach complex quantum computations becomes child's play. One can even compare this method with Feynman's diagrams in terms of simplification of computation.

I said in prior posts that I was not aware a few years ago that my research area of reconstruction of quantum mechanics from physical principles is categorical in nature. But I can now take it a step further and create a pictorial proof of my results (it looks like a tangled mess so I won't draw it here). For this I need to introduce the concept of products and coproducts. In general any product (e.g. complex number multiplication, group operation, etc.) can be understood as a machine which takes two elements and generate another element. Flip the machine around and you get the related concept of a coproduct: 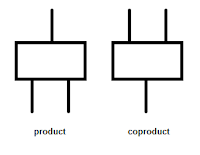 Because quantum mechanics is universal, it applies just as well to single physical systems and to composite systems which are represented using the tensor product ["while", \(\otimes\)]. It is the interplay between products, coproducts and the tensor product which completely determines the algebraic structure of quantum mechanics. All I need is a basic starting point: a product which appears naturally. And this is the Leibniz identity which comes out of the fact that the laws of nature are stable and unaffected by the passage of time. In the infinitesimal case this generates the Leibniz identity which is nothing but the good old fashion product rule of differentiation. Two mathematical representations of this product are the commutator and the Poisson bracket and they correspond to the quantum mechanics Hilbert space and phase space formulations. But I will talk more about this in future posts.

I was asked on Twitter the following excellent question:
"Has use of this pictorial/categorical formalism led to any new results? (as Feynman diagrams certainly did)"

I do not want to reveal without permission the identity of the person who asked this question, but I want to give here an extended reply which was not possible under Twitter's insane character limit.

My answer is that the pictorial formalism did not led to new results (as far as I know) as this formalism is strictly a reformulation of the Hilbert space formalism and what you can do in one you can do in the other one. The categorical approach proved its usefulness in quantum mechanics reconstruction in explaining why the results were the way they were, but this was hindsight, an "aha moment". The original motivation came from a very different direction: the attempt to find a common axiomatization for classical and quantum mechanics.