The Transactional Interpretation of Quantum Mechanics

We continue the prior guest post by Ruth E. Kastner (@rekastner http://transactionalinterpretation.org ) with part 2.  Ruth is an expert in the Transactional Interpretation of Quantum Mechanics. She recently published a book on this topic.

Part 2: A Challenge Surmounted, and a Further Development of TI

Part 1 of this guest post discussed how the Transactional Interpretation (TI) can explain quantum measurement, including the Born Rule for probabilities of outcomes. In this part, I’ll show how TI survives a challenge raised by Tim Maudlin.[1]  I’ll also discuss my extension of TI into the relativistic domain. That extension clarifies what an absorber is, and as an added bonus,  explains how the macroscopic world emerges from the quantum level.

Maudlin’s challenge is intended to undermine the idea of a well-defined ‘competition’ between absorbers. Here’s the thought experiment (illustrated in Figure 1): a source emits offer waves for a slow-moving type of particle. The offer wave has rightward and leftward components. 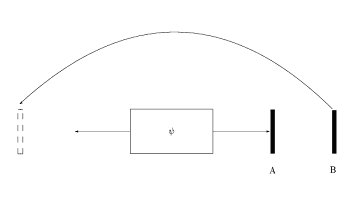 However, the left-hand absorber B is moveable, and it starts out on the right behind A.  It will only be quickly swung around to the left if A does not detect the quantum by the travel time needed for the quantum to reach A, in which case the rightward transaction has failed. If this occurs, B will just be picking up the actualized quantum already headed for the left.
Note that B cannot return a confirmation from its position behind A, so B never returns a confirmation when the quantum is detected at A. If the incipient transaction with A fails, then the quantum is certain to be detected at B. Maudlin argued that this scenario makes the transactional account inconsistent because he considered the weights of the incipient transactions as probabilities that apply to detection at specific detectors. In this scenario, detector B is certain to detect the quantum whenever it is swung around, even though that leftward incipient transaction only has a probability of 1/2.
There are a variety of solutions to the Maudlin challenge. [2] But perhaps the simplest was suggested by Marchildon (2006), and that’s what I’ll present here. He noted that the direct-action picture, as developed by Wheeler & Feynman (1945, 1949)  and Davies (1970-2), assumes complete absorption of all emitted fields – otherwise, it is not guaranteed to be empirically equivalent to standard theories of radiation or to observed radiation phenomena. So Marchildon includes a remote background absorber C, which always responds with a confirmation to the leftward offer wave (see Figure 2). Thus we always have two incipient transactions, each with probability ½, and these correspond to the frequencies of detection on the right and the left. 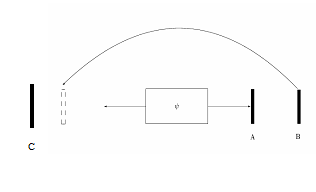 Figure 2. Marchildon’s solution to the Maudlin challenge:
there is always a confirmation from the left.

The probabilities also need to be understood as applying to the quantum itself, not to specific detectors. This makes sense because each offer and confirmation embodies specific physical quantities that are actualized when that incipient transaction is actualized. So we have a probability of ½ that a quantum with leftward momentum will be actualized, and a probability of ½ that a quantum with rightward momentum will be actualized, and there is no inconsistency. It does not matter whether B or C receives the actualized quantum.
Other worries surrounding the Maudlin challenge involve possible causal loops, but these are eliminated when we get away from the typical (but unnecessary) ‘block world’ picture.[3]  In my development of TI, offer waves are physical possibilities, not spacetime events. Only actualized transactions correspond to spacetime events; indeed, this is how events are brought into being.

The relativistic domain, rather than presenting a problem for TI, actually resolves some issues facing the original, nonrelativistic version. This is in stark contrast to other interpretations that struggle with a relativistic extension.[4]  The relativistic domain addresses interacting quanta, and it is in these details that we find a quantitative basis for both the emission of offer waves and the absorption of those offers, which generate confirmations. This allows us to answer the question “What is an emitter?” and, probably the more pressing question: “What is an absorber”?
We find those answers in the relativistic coupling between fields. As Feynman noted in the context of quantum electrodynamics (QED), the coupling constant is the amplitude for an electron to emit or absorb a photon (Feynman 1985, p. 129). In the transactional picture, these correspond to the emission of an offer wave or the generation of a matching confirmation, respectively. The coupling constant is only ~0.085 (and is further reduced in practice by additional requirements involving the relevant conservation laws). Moreover, the applicable probability is the fine-structure constant , 1/137 (the square of the coupling constant), less than 1%.[5] This tells us that neither emission nor absorption is very likely for any individual quantum. But the more potentially emitting or absorbing quanta that comprise an object, the higher the probability of emission or absorption by that object (see §5 of this paper).
Let’s focus on absorption: it turns out that once you have an object composed of enough potentially absorbing entities that the probability of its generating a confirming response to an offer wave approaches unity, what you have is a macroscopic object. For example, a potential absorber is an atomic electron in its ground state. If you took about 100,000 ground state atoms, they would make up roughly the width of a human hair. This many atoms as components of an object would virtually guarantee the generation of a confirmation somewhere in that object, since the probability that none of its 100,000 component ground state electrons responds to an offer with a confirmation is nearly zero. Such an object can be unambiguously identified as an absorber. (But that doesn’t necessarily mean that it will be the one receiving the actualized quantum resulting from the ‘winning’ actualized transaction).
So we see that quantifying the emission/absorption process via relativistic coupling gives  an account not only of what constitutes an emitter or absorber, but also of the emergence of the macroscopic objects that are those emitters and absorbers. Thus, in TI we resolve the issue of the ‘HeisenbergCut,’ we gain a physical account of measurement, and we can read off Von Neumann’s theory of measurement and the Born Rule. More details are available in my 2012 book.[6]

[1] Maudlin first presented his challenge in his (1996).
[2] E.g., Kastner (2006), Kastner (2012, Chapter 5).
[3] I discuss these points in Chapters 5 and 8 of my book.
[4] E.g., the Bohmian and ‘spontaneous collapse’ interpretations which modify the basic theory by introducing an ad hoc nonlinear term in the basic Schrödinger evolution.
[5] This is because both emission and absorption are required – neither happens without the other in a direct-action picture.
[6] Also forthcoming from Imperial College Press: my next book on TI, a popular account for the general reader.
Posted by Florin Moldoveanu at 2/21/2014 09:46:00 PM