The Transactional Interpretation of Quantum Mechanics

Today I have the privilege to host a guest blog post by Ruth E. Kastner (@rekastner http://transactionalinterpretation.org/ ) who is an expert in the Transactional Interpretation of Quantum Mechanics. She recently published a book on this topic.

The Transactional Interpretation of Quantum Mechanics (‘TI’ for short) was proposed by John G. Cramer in the 1980s (Cramer’s comprehensive 1986 presentation is here). The distinguishing feature of TI is its ability to ‘read off’ the Born Rule for the probabilities of measurement results from the basic formalism. How does it do this? By including the solutions of the advanced (negative energy/time reversed) Schrödinger Equation, as well as the retarded solutions of the usual Schrödinger Equation.
TI is based on the Wheeler-Feynman time-symmetric theory of classical electromagnetism (Wheeler and Feynman 1945, 1949). In this theory, a charge emits a time-symmetric field having equal components retarded and advanced radiation, while any absorber responds to that radiation by generating its own time-symmetric field. The responding field is exactly out of phase with the stimulating field. This results in the cancellation of all fields except the one between the emitter and the absorber—that field is built up to full strength, thereby transporting energy from the emitter to the absorber. (See below.) 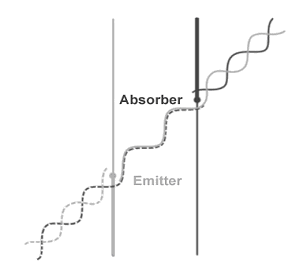 The Wheeler-Feynman theory accounted nicely for ‘radiative damping,’ or loss of energy by a radiating charge. This could only be accounted for in the traditional theory (which assumes only a retarded field is radiated) by assuming an ad hoc sourceless ‘free field’.  Wheeler and Feynman’s original motivation in developing this ‘direct action’ theory was to eliminate the field as an independently existing entity, to solve the problem of self-action in the classical theory – in which a charge interacted with its own field, resulting in infinite energies. They lost interest in it when they found that some degree of self-action was needed to account for relativistic effects (such as the Lamb shift). However, the direct action picture can still be used, and in fact Davies developed a direct-action picture of quantum electrodynamics in the 1970s (Davies 1970, 1971, 1972).[1]
The transactional interpretation is an application of the direct action picture to quantum systems. It departs from the Wheeler-Feynman (WF) classical picture in the fact that, instead of being a continuous quantity, energy can only be delivered in discrete packets (quanta). The usual retarded quantum states, such as |Y>,  are called offer waves (OW) and the advanced states, <F|,  are called confirmation waves (CW). Since TI deals with quantized energy and momentum, many absorbers may respond with CWs to an emitter’s OW, but (for a one-quantum OW) only one of the responding absorbers can actually receive the energy. But this quantized version of the WF picture allows for a very nice resolution of the notorious ‘problem of measurement’: namely, it allows one to ‘read off’ the heretofore mysterious ‘Process 1’ of John Von Neumann’s theory of measurement, which also contains the Born Rule. We’ll now see how this works.
To review, ‘Process 1’ is the transition of a quantum system from a pure state to a mixed state upon measurement, i.e.:

The coefficients |cn|2 are the probabilities given by the Born Rule for each of the outcomes yn.
Von Neumann noted that this transformation is acausal and fundamentally irreversible, yet he was unable to explain it in physical terms, and treated this transition as fundamentally dependent on an observing consciousness. However, if we take into account the advanced responses of absorbers, then for an OW described by |Y>, we have for a collection of numbered absorbers: 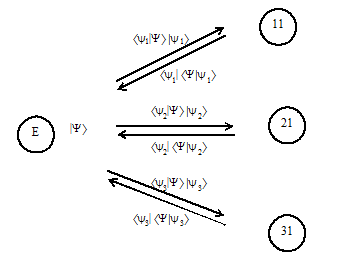 In the above diagram, an initial offer wave from emitter E passes through some measuring apparatus that separates it into components áyn|Yñ |y nñ, each reaching a different absorber n. Each absorber responds with an advanced (adjoint) confirmation áyn| áY|y nñ. In TI, these OW/CW encounters are called incipient transactions. They are described in probabilistic terms by the product of the OW and CW, which gives a weighted projection operator:  áyn|YñáY|ynñ |y nñáy n | = |cn|2 |y nñáy n |. If we add all the incipient transactions, we clearly have the density operator representation of ‘Process 1”:

Thus, by including the advanced responses of absorbers, we have a physical account of measurement as well as a natural explanation of the Born Rule and Von Neumann’s ‘Process 1’. The response of absorbers is what creates the irreversible act of measurement and breaks the linearity of the basic deterministic propagation of the quantum state. Since the conserved physical quantities can only be delivered to one absorber, there is an indeterministic collapse into one of the outcomes y k  with a probability given by the weight |ck|2  of the associated projection operator |y kñáy k |. This is called an actualized transaction, and it consists in the delivery of energy, etc., to one absorber. I see this is a form of spontaneous symmetry breaking (this is discussed in Chapter 4 of my book).
I have been developing the transactional picture in two specific ways: (1) investigating what kind of ontology underlies the offers and confirmations, especially when these are multi-quantum states: and (2) extending TI explicitly into the relativistic domain to give a more detailed account of emission and absorption, both of which are inherently relativistic processes. Both emission and absorption play crucial roles in defining the measurement process.  Only the transactional picture, in which absorption contributes advanced states, provides a physical basis for what is otherwise an ad hoc mathematical recipe (Von Neumann’s ‘process 1’ and the accompanying Born Rule). In Part 2, I will discuss my recent developments of TI. Further information and discussion is available at my website (http://transactionalinterpretation.org/ ).