Observables are Hermitean operators. In matrix notation this means that an observable is the same as its transpose and complex conjugate. The natural question to ask is: what mathematical properties can be derived from this observation. Can observables be combined to create other observables? Do observables form an algebra for example?

The answer is yes provided we have a product which preserves the hermiticity. However, a problem comes from transposition: if C = A B , then C^dagger = (A B)^{dagger} = B^{dagger} A^{dagger} and if A = A^{dagger} and B = B^{dagger} then C^{dagger} DOES NOT EQUAL C Can this be fixed? Indeed if we define a symmetrized product called the product:

This product is not quite associative, but respects a weaker property called power associativity: A^(m+n) = A^m o A^n

This allows to have well defined polynomials and we can also define the product in terms of operators squared:

If we also demand that the algebra is in some sense “real”:

Then we have what it is called: a “real algebra”.

Now in quantum mechanics the states are defined only up to a phase because the Born rule: p_A(Psi) = |<Psi| A | Psi>|^2 ignores the phase which is an unobservable quantity.

So if a Hilbert space is about orthogonality, the physical states correspond to rays in a Hilbert space. This means that we are looking at projective spaces.

Do we have a complete classification of real algebras? Yes, and it is as follows:

If you compare the dimensionality of the projective spaces above with the number of linear independent projectors from the prior posts you’ll see that they are the same (and for very good reason).

From the algebra point of view one can see that a quaternionic quantum mechanics is in principle possible, but what does it mean and what it is gained by that?

Fortunately there is an outstanding resource available, a comprehensive monograph by Stephen Adler:  “Quaternionic Quantum Mechanics and Quantum Fields”

Adler starts from the fundamental definition of a quantum system: “in quantum mechanics, probability amplitudes, rather than probabilities, superimpose”

From this and Born rule one demands the existence of a “modulus function” N with the following properties:

By a mathematical theorem, the properties above restrict the number system for quantum mechanics to be: reals, complex numbers, quaternions, and octonions). In later posts we shall see that this is not the complete classification and there are many more number systems possible.

In quaternionic quantum mechanics, physical states are in one-to-one correspondence with unit rays in the quaternionic Hilbert space of the form:

What does this mean? Quaternions correspond to rotations and rotations are non-commutative. An easy way to see this at home is to rotate a book on two axis: 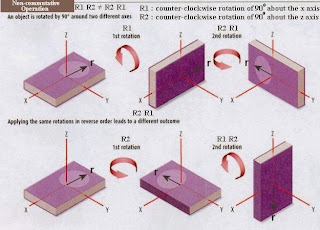 But if quantions are non-commutative, we must be very careful about the order of terms. In particular there are distinct left and right eigenvalue problems!!!

So why bother with this order hassle which is non existent for complex quantum mechanics? Because it may provide new physics, new insight, and it may lead to unification in terms of fundamental forces and/or relativity.

Here is how the story goes:

Observables are maps which transform a wavefunction in another wavefunction. By Riesz representation theorem on Hilbert spaces, observables can transform two wavefunctions into real number (this is because of Born rule).

As operator algebra, the observables obey a Poisson bracket algebra isomorphic with a commutator algebra. In this classical mechanics picture, to quantify and arrive at quantum mechanics we need to impose a constraint to preserve hermiticity. The constraint is: observables must commute with the imaginary number. Complex quantum mechanics is classical mechanics on CP^n formulated as a constrained Hamiltonian system on C^n. The imaginary unit realizes another observables duality called the dynamic correspondence which maps observables to generators, or the map between a algebra to a Lie algebra.

Suppose now we have a system with time symmetry Theta. By Wigner’s theorem an isometry Theta is implemented unitary or anti-unitary:

The sign choice depends whether the spin is integer (bosons) or half-integer (fermions).

For fermionic physics, preserving the statistics means that the observables obey a superselection rule:

We knew from above that this holds as well:

So we can collect the terms now and define i, j, k:

This defines the algebra of quaternions!!!

Now it is clear why there is no tensor product in quaternionic quantum mechanics: two fermions cannot be understood as another fermion!

Similarly, real quantum mechanics can be associated with bosons and there is no tensor product there also for the same reason. (As a strong word of caution, the association with bosons and fermions is not one-to-one.)