The amazing power of dimensional analysis

Hardy’s 5 reasonable axioms paper was generalized by Jochen Rau using dimensional analysis. To understand it we need to start with a mathematical detour.

The solution was found by Galois and the key was in the permutation of solutions. This lead to what is now called the Galois group. This marriage between group theory and algebraic equations led Sophus Lie (by the way he was Norwegian not Chinese) to wonder if something similar would hold for continuous groups and differential equations. This idea was the starting point of the Lie groups which are continuous groups. As an example, the group of rotations in the ordinary three dimensional space is a Lie group.

What is important is that each of this series has a definite dimension. As a useful side note, the tangent space at the origin of any Lie group forms a Lie algebra and this plays a major role in quantum mechanics.

Fast forward to present day, Jochen Rau considered the following problem: why is a Lorentzian manifold distinguished from all other event manifolds http://arxiv.org/pdf/1009.5523.pdf ? The solution combines physical principles with the mathematical fact of Lie group dimensionality.

The answer is yes and it resulted into a paper called “Consistent reasoning about a continuum of hypotheses on the basis of finite evidence” . While the paper title does not do justice to its content, the result is very important and it represents a generalization of Hardy’s 5 reasonable axiom result. In particular it clarifies what happens when r>2 for Hardy’s K=N^r equation discussed in the prior post. When r=3 and above, probabilities are no longer continuous. What does this mean?

Let us recall the most general relationship:

Yes we do, they are Feynman diagrams!!! 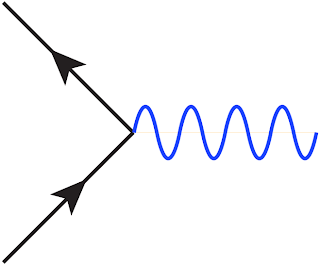 And the higher order terms correspond to Feynman interactions where 4, 5, 6, n legs joined in one vertex. For each leg, there is a discontinuity at the vertex, and the legs do not enter into a superposition.

Now the question becomes: can we find a sequence of numbers a,b,c,d,… such that K = N^r with r>2? For now the answer is no, but the problem is still open.

Next time I will start talking about quaternionic quantum mechanics and the meaning of its lack of a tensor product.