Geometrization of the Standard Model

Now we can explain Cones' framework to the Standard Model coupled with (unquantized) general relativity. This requires a bit of a mathematical preliminary: short exact sequences:

where the image of each map is the kernel of the next one. The beginning zero means that the A to B map is injective, while the last zero  means that the B to C map is surjective.

Short exact sequences come in several flavors, but we have two cases of interest:

Now we introduce a toy model: a \(U(n)\) gauge theory coupled with general relativity. Suppose we have a coordinate algebra \(A\) on a non-commutative space in the following way:

This means that on the ordinary space-time manifold we attach at each point an \(n \times n\) complex matrix, which acts as internal degrees of freedom for the generalized notion of coordinate on this (now a) noncommutative space. We are now investigating the automorphisms of the algebra \(A\): \(Aut(A)\). One trivial subgrup of \(Aut(A)\) are the so-called inner automorphisms: \(Inn(A)\) which is constructed by sandwiching an element of \(A\) with an invertible element \(u\) like this:

Moreover this is always a normal subgroup and we have the following short exact sequence:

which is identical with (drum roll please...) 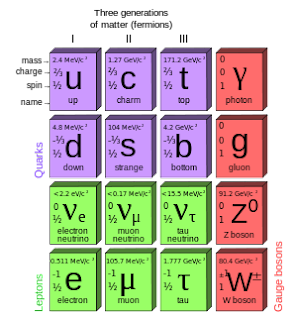 So now the only thing we need to do is find an appropriate algebra \(A\) such that we get the Standard Model gauge group (subject to the constraint that there is a simple action functional identical with SM+GR action when applied to the noncommutative space). This was easier said than done, and it took Connes and collaborators (Marcolli, Chamseddine) several iterations and many years (I think over 10 years) until they fully recovered the Standard model in its entirety (including 3 generations of mass and the correct value of the Higgs boson mass).

For the Standard Model The algebra \(A\) is a beast; if I recall correctly it has 96 dimensions. One simple earlier iteration was:

As a side note, Emile Grgin's quantionic quantum mechanics is the same as Connes' toy model when \(A = M_2(C)\).

To uncover the algebra able to reproduce all the known Standard Model experimental facts, a deep dive into K-theory and spectral triples (a spectral triple is a generalization of a \(Spin^C\) manifold) was required. As a mathematical curiosity, the non-commutative space in the Standard Model case turned out to be two copies of the manifold M, meaning a product of a continuous manifold with a discrete space. It is interesting to see the physical mapping of the Standard Model in the new language of noncommutative gometry. For example the Higgs boson links the two copies of the manifold and the two copies are a Highs boson Compton length apart, a picture reminiscent of the branes in string theory.

There were attempts to apply Connes' geometrization ideas to string theory, but they were not successful. More interesting facts about the Standard Model were uncovered by Kraimer and Connes: a particular renormalization technique was proven to be the marriage of two well known mathematical areas: Hopf algebras and Birkhoff decomposition (which has direct application in solving solitonic equations)