Today I want to stay in the realm of cosmos and talk about a light topic for a change: the very nice movie "The Martian". I saw it in 3D on an IMAX screen and this is the way to see it. However, I really needed to suspend disbelief to enjoy it and I want to talk about some blatant nonsense. So spoiler alert, if you did not see the movie and don't want me to ruin it for you do not scroll down below the pictures and please came back next week for the new (physics) post. 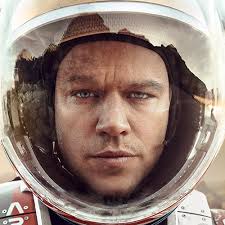 The plot of the movie is simple: caught in a Martian dust storm a crew of NASA astronauts are forced to leave the planet in a hurry but one of them is injured in the process and is presumed dead. However he is not dead and is forced to survive alone on Mars until the next NASA mission will arrive. He lives in a housing compound and here is the first problem. The airlock of the compound is way too big and this waists a lot of air and energy every time you go in and out. At some point in the movie the airlock malfunctions and blows up, and guess how the huge hole in the compound is repaired? With a thin plastic sheet attached with duct tape. Really? Duct tape?

Moving along. The rocket which brought the astronauts to Mars was supposed to be powered by some plutonium reactor. The plutonium core was buried next to the compound about 1 foot deep in the sand for "safe disposal" and the spot was marked with a flimsy flag which one usually finds on bicycle attachments for kids. The huge storm which stranded the main character on Mars was about to tip over the Mars departure rocket but it had no effect on the flag! And the astronaut finds this plutonium core later on and uses it as a heater for his rover. The radiation was apparently of no concern.

Now back on Earth, some sort of graduate student who sleeps in his office figures out a new trajectory for the main Mars ship to return by slingshot around the Earth. He needs to double check his computation on a supercomputer, and how does he do it? We see him on the floor in the supercomputer server room connecting his laptop with a USB cable directly to one of the servers blades. Apparently proper remote connections were yet to be discovered, and anyone can just stroll at will in server rooms. The supercomputer confirms his computations but when the final rescue is happening, the crew discoverers that they will miss the meeting point by some 32 kilometers. Some supercomputer calculation!

More blatant nonsense happens when the crew of the big spaceship attempts to slow down their ship and fix the 32 kilometer gap by blowing a hole in the front of the ship to use the escaping air as a speed break.  The person placing an improvised explosive device has to do a space walk outside the ship, and he is not tethered in any way. Any miss on gripping various parts of the ship as he flies around would have sent him to his death in outer space. But the captain of the ship who is exiting the ship to catch the stranded astronaut arriving from Mars is fully tethered, and her spacewalk suit is also equipped with small rockets for independent mobility. The perks of being the boss I presume.

And surprise: the unnecessary tether is too short. This would belong more in a Laurel and Hardy comedy than in this movie. And now for the grand finale and the icing on the cake, the stranded astronaut is cutting the finger of his spacesuit glove to use the escaping air to propel himself the missing distance. Never mind he should probably be dead from the suit decompression, he arrives quite healthy, smiling, and breathing normally in the arms of the captain of the mission: a nice romantic happy ending.

Now don't get me wrong, I do like this movie and I would enjoy seeing it again. It is just that common sense is abused too much and the movie starts resembling productions of Godzilla from the 60s where the monster is nothing but a series of poorly made still photographs of a plastic toy.
Posted by Unknown at 11/06/2015 09:54:00 PM