For today's post I want to explore some interesting facts about classical mechanics. But why should we care about classical mechanics if nature is quantum at core? One misconception I used to have was that we should care only about the emergence of classical physics out of quantum mechanics. I was not alone in this misconception, the late Sidney Coleman supported this point of view in his outstanding talk: Quantum Mechanics in your face. But as it turns out rigorous deformation quantization starting from a Poisson manifold can help arrive at the standard formalism of quantum mechanics. 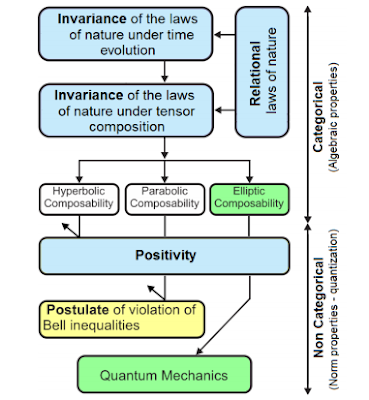 And to achieve that we need to understand the mathematical structures involved in classical mechanics: cotangent bundles, symplectic manifolds, Poisson manifolds. Because I did not write the needed mathematical posts for symplectic geometry I will keep the discussion at high level.

The Hamiltonian is obtained from the Lagrangian using a Legendre transformation:

While the Lagrangian formulation is best suited for field theory and its relativistic formulation, the Hamiltonian formalism is more natural for classical and quantum mechanics. One reason to use the cotangent bundle over the tangent bundle is the existence of a canonical "God given" 1-form:

The hierarchy of spaces used in classical mechanics is:

To go from the cotangent bundle to a symplectic manifold we use the canonical 1-form \(\theta\):

The prototypical is the free pivoted rigid body rotation. The Hamiltonian is:

the Poisson bracket is:

which makes the Hamiltonian equations of motion:

The most general Poisson bracket can be proven to be:

But how do we get the crazy Poisson bracket from above? The answer is symplectic reduction. I did not built the mathematical pre-requisites of moment maps to explain in an intuitive way how this works, and this will have to wait for future posts. In the meantime I can state some conclusions.

First, category arguments can reconstruct both classical and quantum mechanics. In the classical case those arguments offer no help in proving the existence and non-degeneracy of \(\omega\). All we get from category arguments are Poisson manifolds! So it is imperative to prove that one can use deformation quantization on any Poisson manifold to arrive at quantum mechanics. Fortunatelly such a proof exists and was found by Maxim Kontsevich in 1997: http://arxiv.org/pdf/q-alg/9709040v1.pdf A remarkable fact is that the proof uses string theory insights!!!

Second, the existence of time without invariance under composition is not enough to reconstruct either classical or quantum mechanics. The best counterexample comes from soliton theory and the Korteweg-de Vries equation. A KdV equation comes from a Poisson manifold without a symplectic analog, and moreover it is a bi-Hamiltonian system. KdV admits not one, but two Poisson brackets compatible with each other!

Third, not all quantum systems come from quantization of classical systems.