­Should Gravity be Quantized?

Merging quantum mechanics with general relativity is the hardest problem of modern physics. In naive quantum field theory, treating gravity quantum mechanically involves adding smaller and smaller distance contributions to perturbation theory but this corresponds to higher and higher energy scales and adding enough energy will eventually lead to creating a black hole and the overall computation ends up predicting infinities. String theory, loop quantum gravity, and non-commutative geometry have different ways to deal with those infinities, but there are also approaches which challenge the need to treat gravity using quantum theory. Those approaches are a minority view in the physics community and I side with the majority point of view because I know it is mathematically impossible to construct a self-consistent theory of quantum and non-quantum mechanics. But wouldn't be nice to be able to put those ideas to an experimental test? 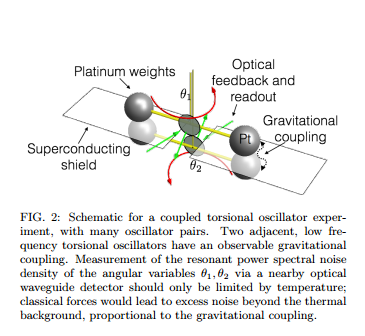 Penrose advanced the idea of the gravitational collapse of the wavefunction and Diosi refined this in the best available model so far. Rather than looking at decoherence of objects due to gravity, Dvir instead asks the following question: can two masses which only interact gravitationally become entangled? Direct superposition experiments are out of the question, but how about measuring some sort of residual quantum noise required to screen the entanglement from occurring in the first place? Sure, since the gravitational coupling is so weak, the noise needed to do this is really tiny, but what if we cool the experiment close to absolute zero? One experiment is not enough because at 10 micro Kelvins you expect one thermal phonon to be emitted every 10 seconds and the desired effect produces a phonon every 3000 seconds, but massively replicating the experiment in parallel might work to extract the signal (replicate 10,000,000 times! – OK this is a bit in the realm of science fiction for now but maybe future technological advances will drop the price of such an experiment to something manageable).

Dvir motivates the experiment by modeling how two distant objects can communicate by individually interacting with an intermediary object.
Here is a slide picture from Dvir’s presentation (I thank Dvir for providing me with a copy of his presentation) 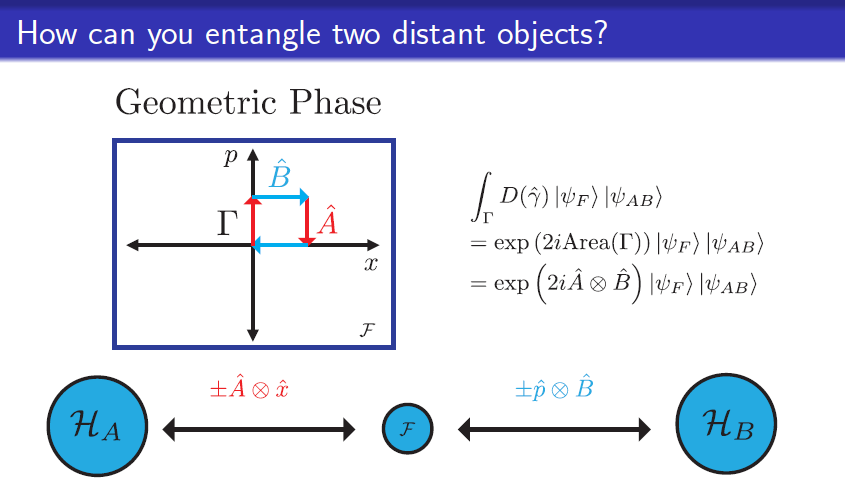 Please note that position and momenta are non-commuting operators. So you apply A first, followed by B, followed by –A and the by –B. The intermediary F (a harmonic oscillator) is unchanged by this procedure, but gains a geometric phase proportional to \( A \otimes B \). In other words this is what happens: 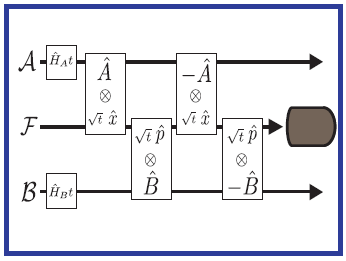 If you break this process into n infinitesimal steps and repeat n times, by a corollary of Baker-Campbell-Hausdorff formula you get:

This picture is a simple model for how two objects can become entangled, To prevent that entanglement (but still allow communication between A and B), we add a “screen” S  which captures the coupling with the environment 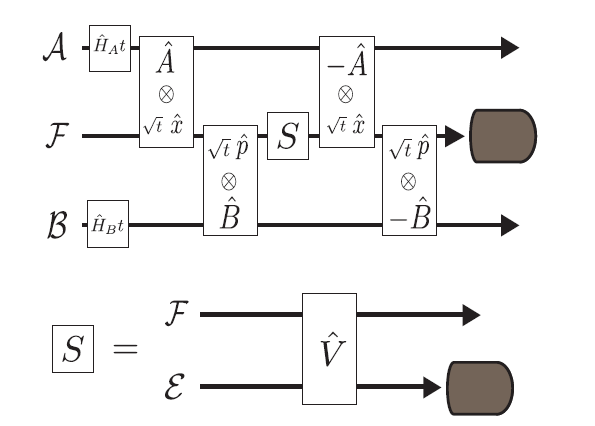 By the monogamy of entanglement, this can only decrease the entanglement between A and B.
Since the environment is learning about A and B through F, Dvir invokes what he calls the “Observer Effect”: a measurement of observable \( O \) necessarily adds uncertainty to an non-commuting observable \( O^{’} \). In this case, the process of screening entanglement means that all observables not commuting with A and B become noisier.

Here is an experimental setup that is analogous to the first experiment: S is a weak measurement and the purpose is to see the noise generation, which is model-independent in that the equations of motion are the same. 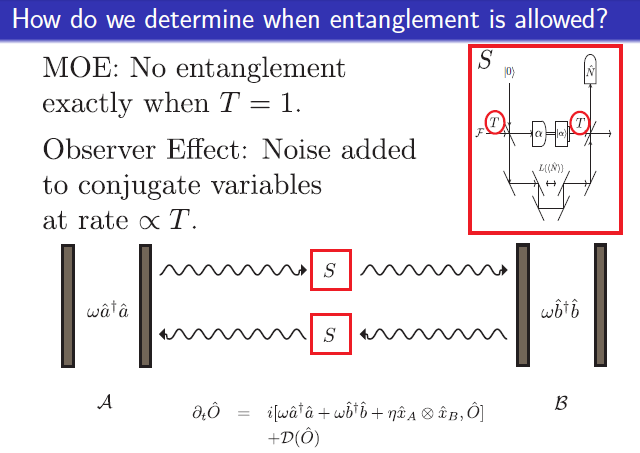 If a certain inequality is violated (relating the strenght \( \eta \) of the \( A \otimes B \) interaction to the noise added to the system), then the communication channel between the Alice-Bob system transmits quantum information. Analogously, if we can verify that \( \eta \) is only due to gravity (that is why there is a superconductor shield between the oscillators coupled by gravitational attraction), by observing the noise and checking the inequality we can conclude that gravity can convey quantum information. Pretty neat.