Quantum mechanics in your face

Two weeks ago I discussed the GHZ-M argument and I listed the exceptional talk by late Sidney Coleman. Today I want to revisit the strange nature of quantum mechanics and show how it violates common sense and classical intuition.

This time I will present an argument introduced by late Asher Peres in his classic book: “Quantum Theory: Concepts and Methods” which uses the discrete measurement outcomes for spin.

Now I assume everyone is familiar with the idea that spin is quantized and takes only discrete values when measured. But what does this mean and why this is counterintuitive? Spin measurement can be done by a Stern-Gerlach experiment: 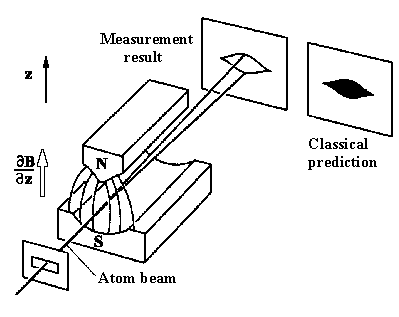 silver atoms evaporate from an oven, pass through a velocity selector, then go through an inhomogenous magnet before hitting a detector. Classical physics predicts that the magnet causes the precession of the atoms and a vertical deflection in a continuous range from +μ to –μ (here I skipped the details of the derivation but please take my word for it).

But what is the experimental result? Only two deflection results are obtained and so “spin is quantized”.

But what is so special about it? What is special is that we can rotate the orientation of the magnet and still obtain only two outcomes because of the rotational symmetry. And this can generate a classical contradiction. Here is how:

Pick there orientations of the measurement direction, e1, e2, e3, 120 degrees from each other. By symmetry, e1+e2+e3=0 (here we add them as vectors). Now assume that the atoms have an intrinsic magnetic moment μ along a certain direction. In general the experimental outcome is computed classically to be the scalar product of μ with the particular measurement direction: e1, e2, e3.

The argument can be criticized because we are reasoning counterfactually and there is no experiment possible to measure all three simultaneously. In fact the three measurements are mutually incompatible. The contradiction still stands if (as Asher Peres put it) a measurement is a passive acquisition of knowledge. The strange world of quantum mechanics where objective reality does not exist before measurement is forced upon us by the humble discrete measurement outcome.
Posted by Florin Moldoveanu at 3/15/2014 12:20:00 AM