Let me start with the answer for the problem I posted last time. The hard part for finding the projectors in quantum mechanics when the number system is non-commutative is to realize the proper place to put the scalars:

with lambda*lambda = lambda. If the number system is a division algebra (like in the case of quaternionic quantum mechanics) by dividing with lambda it follows that lambda = 1. However this is not the case for quantionic quantum mechanics. Expressing the quantions as a linear combination of the Pauli matrices and the identity operator over complex numbers:

and using the algebraic properties of the Pauli matrices, from lambda*lambda = lambda one gets:

Coming back to gauge theory, the gauge degrees of freedom leave invariant every observable in the physical system. So why bothering with them one may ask? Because they have very big physical consequences.

Let’s explain it using a nice analogy from everyday life. Think of a thick rug. 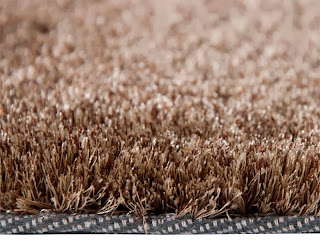 At each point in the rug there is a piece fiber sticking out. Suppose somebody drags something across the rug (it could be a toy track for example) and leaves a mark on it. How can we describe this local disturbance in rug’s fibers? If we look very closely we notice displacements between nearby fibers. Mathematicians call this a “connection” which allows to quantify correctly the notion of change (covariant derivative) and a notion of moving from one place to another (parallel transport). What this means is that if the rug is rolled up or twisted in some way, we need to add the local disturbance to the global rug twist to predict correctly the location of each fiber.

Fine, it is not hard to grasp those mathematical concepts but what this has to do with physics?

The remarkable fact is that what mathematicians call connections, physicists call potentials (like the electromagnetic potential).

Grgin’s book has a nice parallel between the gauge theory of electromagnetism, gravity, and quantionic quantum mechanics (electroweak gauge theory).

So here is how it works: in each point of space-time we attach a “fiber” in the form of a quantion. If in ordinary quantum mechanics one has functions of complex variables, here we have functions of quantionic variables. A key difference is in normalization. In a quantionic quantum field, by Zovko interpretation, we demand that the conservation of a quantionic current stemming from the inner product  q^* q. Everything else follows from this.

In gauge theories, the “marks of the toy truck on the rug” are actually particles (lines in a Feynman diagram). The forces are generated by gradients of the potentials, and the potentials are the “connections” allowing the “parallel transport”, or the means to compare nearby points in space-time. In the Standard Model, there are three gauge symmetries: U(1), SU(2), SU(3) corresponding to three fundamental forces: electromagnetism, weak, and strong force. Grand unification theories (GUT) seek to find a common “underlying rug”. A general feature of GUTs is the cross talk between related “fibers” which means that particles are not stable and in particular the proton is not stable and is eventually decaying into leptons.

In quantionic quantum mechanics there is also a notion of curvature and holonomy as well.

Can ordinary complex quantum mechanics predict holonomy effects too? The answer is yes and we will cover it next time.